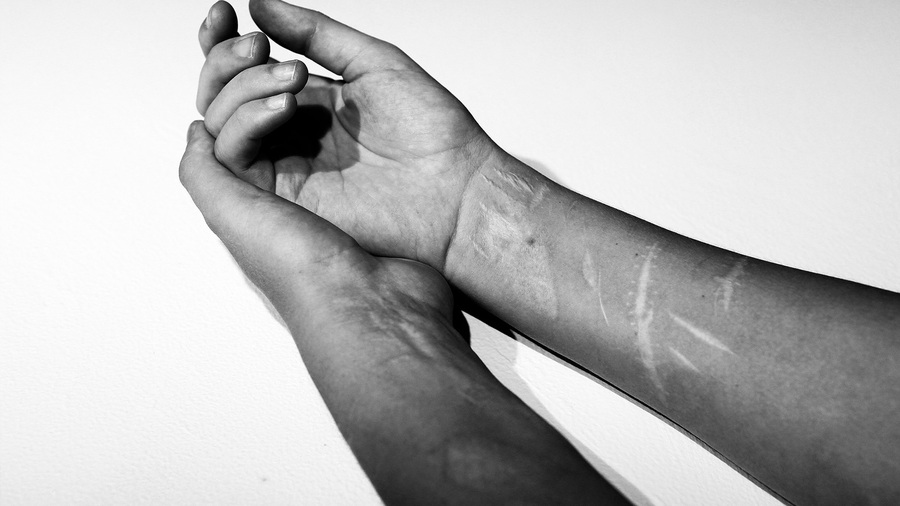 Self-harm is often overlooked in practitioner training despite it being common, especially among younger clients. In this article, we will provide an overview of what self-harm is and reasons why it may happen.

Purposefully harming yourself is known as self-harm. Self-harm is often done in secret making it difficult to recognise or support someone.

Some common ways people can self-harm are:

Victoria Healthy Youth Survey conducted on the youth aged from 14 to 21, found out that 16.9 percent of the questioned students claimed to have ever harmed themselves. Out of which, 83.2 percent of the students did it by cutting, hitting, and scratching.

Self-harm is commonly found in young people suffering from anxiety or depression. Though, people without any mental health issues also end up that way.

There are high chances of people harming themselves if they:

Why do people self-harm?

There are various reasons why one goes so far that they hurt themselves. It could be when they are surrounded by sadness and misfortune, are hating on themselves thinking they were at the wrong and they are the one to blame or hurt themselves to take their attention off of the feeling that’s been disturbing them. Some even do it to show others how they feel. The following are some common reasons that are observed in people that do self-harm:

They may do it to control their feelings

Being consumed and confused by their feelings (like agony, guilt, helplessness) is one of the most common reasons for self-harm.

Not being able to express one’s feelings in words, or feeling like no word can explain the intensity of how one feels, they resort to physical means. It may be the case when they are in denial of their feelings even if they are completely aware of what it is, thinking that it is unacceptable.

Our brain is designed in such a way that physical pain clouds mental pain. For this very reason, when someone is overwhelmed by their feelings they distract themselves by physically hurting themselves. Many people consider this a small distraction, pain-relieving, and stress releasing.

They may self-harm to express their emotions

They might be harming themselves to show others how they feel, this is often the case when they feel hopeless or when even the people close to them fail to understand them. Some people get the wrong idea that someone who does self-harm is doing it to seek attention, but the fact is, people that self-harm, try to hide it from their loved ones (family and friends). Some consider self-harm the best way to communicate with others, but that can’t always be true.

They may self-harm to realise the reality

Self-harm is also used as a way to take control of one’s mind, body, and surroundings. Feeling detached from their body and reality is a common phenomenon. It is often denoted by ‘Derealisation’ or ‘Dissociation’. Under such cases, one inflicts physical pain on themselves to feel ‘normal’ and real.

They may do it to punish themselves

When someone is a victim of sadness, guilt, failure, and hopelessness, they tend to be a subject of self-hate. It is only natural that they think of everything to be their fault when nothing goes right for them. Some people self-harm to punish themselves even if all of it was not their fault alone.

Those people can be unaware of the cause of that feeling or to what it is linked but, they just feel like hurting themselves in hope that it will make everything right.

It often happens to people that are afraid or are unable to express their anger towards others. For example, someone does a person wrong, they want to call them out but they are unable to do so, so instead, they just harm themselves.

There is a big difference between self-harm and suicide. Self-harming people do not intend to die, They harm themselves to feel normal and to cope with difficult times. Whereas, suicidal thoughts and suicide is based on taking your own life instead of doing something to better it. However, self-harm can put you at the risk of unintentional suicide.